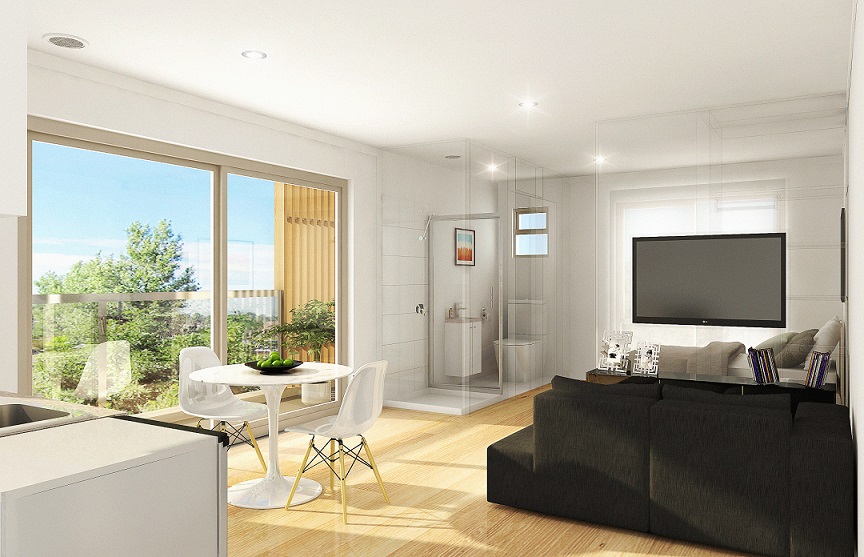 New Look Rooming Houses- And Yes, They Will Work

The old school Rooming House has had a facelift, and it’s looking good!

When 70-year-old Colin Atkinson started looking for a new place to live last year, he was not expecting to end up in a rooming house.

In fact, he didn’t know his newly built studio apartment in Frankston was registered as a rooming house until this week.

Rooming houses have long been associated with being rundown and overcrowded properties occupied by the downtrodden and disadvantaged. And while the stereotype can be stigmatising, it is not unwarranted. The sector is rife with stories about violence, burglary, drugs and unscrupulous operators exploiting vulnerable tenants.

The apartments have a bathroom, kitchenette and private outdoor area. Photo: Modo Builders

Mr Atkinson, a retired painter, cared for his elderly mother until she passed away last year. He moved into the new apartment because it was low-maintenance and close to his grandchildren.

He pays $210 a week for his ground-floor flat, which has its own bathroom, kitchenette, private courtyard and car park.

The building is one of 25 new boarding house developments in Melbourne that are defying decades-old perceptions.

Last year, a government crackdown on rooming houses set out to clean up the sector and stamp out dodgy slumlords. New rules required operators and managers to be licensed and pass a fit and proper person test.

Housing groups have mixed views on how effective the crackdown has been, with ongoing concerns many residents still live in dangerous or overcrowded conditions.

Against this backdrop, new rooming house developments have caught the attention of property investors, lured by the promises of consistent tenancy and government land tax incentives.

Frankston building company Modo Project Builders is behind the two-storey developments, now found across Frankston, Clayton, Templestowe and Footscray. Others are in the pipeline in Heidelberg Heights, Werribee and Geelong.

Property manager Stephen Greville, of LJ Hooker, said most rooming houses were converted family homes, not purpose-built shared accommodation. “Prior to these being built, there has been nothing like them,” he said.

They are classified as rooming houses because the studios are not fully self-contained; residents share a communal kitchen and laundry.

Mr Greville, who oversees 10 rooming house complexes in the Frankston area, said tenants were a mix of students, retirees, tradespeople, nurses and recent divorcees or widows. They each pay between $210 and $270 per week.

The studios were less competitive than the alternatives in the private rental market, Mr Greville added. “One and two-bedroom apartments go very quickly,” he said. “You put them online, have two inspections and they’re gone.”

Housing advocates say there is a shortage of affordable rental options for single people. State government figures from the March quarter found the median rent for a one-bedroom apartment in Melbourne was $360 per week.

While Council to Homeless Persons chief executive Kate Colvin welcomed investment into housing, she said rent that was upwards of $200 per week was not affordable for people on low incomes.

“Our homelessness services help people who are earning as little as $250 to $300 per week,” Ms Colvin said.

Mr O’Brien shared her concerns. “It is a myth that rooming houses are cheap,” he told Domain.

There are no legal requirements for rooming house operators to rent their rooms at below-market rates.

A government spokesman said there were 1246* registered rooming houses in Victoria at the end of June.

*there are literally thousands more that are unregistered and slowly being shut down. These are unregistered for a reason and are substandard, but the rooms being removed from the system need replacing. This is increasing the demand for Modos new generation version.